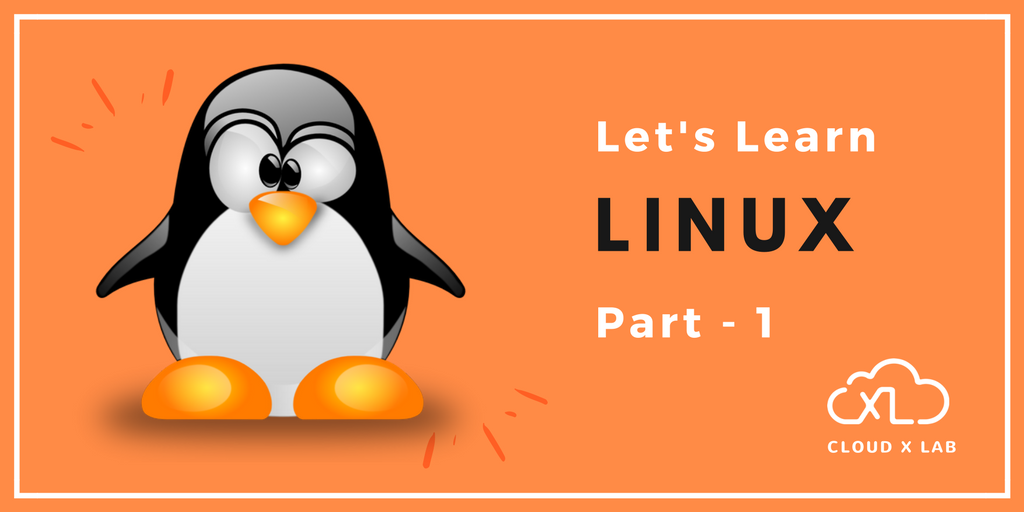 We have started this series of tutorials for Linux which is divided into two blog posts. Each one of them will cover basic concepts with practical examples. Also, we have provided the quiz on some of the topics that you can attend for free.

In the first part of the series, we will learn the following topics in detail

Linux is a Unix like operating system. It is open source and free. We might sometimes use the word “Unix” instead of Linux.

A user can interact with Linux either using a ‘graphical interface’ or using the ‘command line interface’.

The operating system is made of three parts:

A user executes programs. AngryBird is a program that gets executed by the kernel, for example. When a program is launched, it creates processes. Program or process will be used interchangeably.

The Kernel handles the main work of an operating system:

A user interacts with the Kernel via the Shell. The console as opened in the previous slide is the shell. A user writes instructions in the shell to execute commands. Shell is also a program that keeps asking you to type the name of other programs to run.

Everything in Unix is either a file or a process.

When you run a program, a process is created. Every process is identified by a number called process ID. To check the processes you are running, execute “ps” command on the shell. You can think of the process ID to be a sequence number given by the operating system. It may be different at a different execution of the same program.

A file is a sequence of data. A file could be created by users using word processors or text editors or by the program to keep the information. A program is kept in the form of a file and when it is run by the kernel, it loads as a process.

A file is generally written on the disk so that it exists even after the computer restarts. It is saved in a disk – either hard disk drive (HDD – cheaper and slower) or solid state drive (SSD – faster but costlier).

A file is identified by a name called file path. In Unix, everything is represented as file:

Attend the quiz on Process

A file is kept inside a directory. A directory can have a file or another directory inside it. It is like an inverted tree. 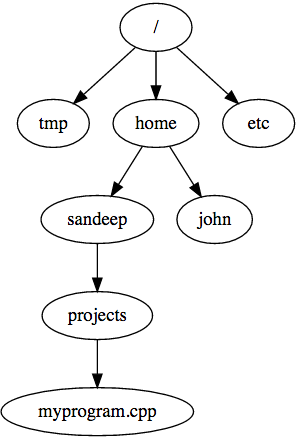 To see the list of files use the command:

There are two ways to represent a file/directory path:

This way of representing a file/directory is independent of current directory of the user. Such paths start with “/”. Examples: /etc/passwd.

You can change directory using “cd” command. Every user is given a separate home directory.

Inside the console, you are always in the directory. On login, by default, you land in your home directory.

To see the present working directory use: pwd

To change the directory to your home directory use only “cd“ command without any arguments.

Attend the quiz on directory

You can create a directory using mkdir command in the following way:

To delete a file you can use ‘rm‘ command. To delete the directory you have to have “-r” switch with rm command.

A file is a sequence of bytes and represents data. It is found in a directory. A file could contain any kind of data: an executable program, data representing movies, music, pictures or plain text.

You can create an empty file using the touch command. Please note that the extension of the file doesn’t matter much in Unix.

You can use a text editor to edit or create a text file. There are many editors in Linux such as nano, pico, vi, emacs. Let’s try to use nano for creating a file

2. Type the following text into it:

3. Press “Control+x” to save and then confirm by typing y

To copy files and directories we use the cp command. Following is the way to make a copy of a file.

mv command is used to move or rename files and directories.

To see what is inside a text file, you can use either cat, tail, or head.

Using cat you can see the whole content of the file:

Do not use this command to look inside a huge file. For the huge file, you can use the “more” command which would display the content of a file in a paginated way:

tail shows you the last few lines of a file

If you want to chase a file – continuously print newlines appended to the file – use the following command:

Attend the quiz on commands

Sometimes you might want to search for a particular file based on various attributes of a file such as size or name etc. The find command comes in very handy for such use cases.

For example, to find all the text files in current directory, you can use this command

If you want to locate a word in files, you can use the grep command. Grep lists all the lines from files in which a particular word exists. Examples of grep

If you want to search in files recursively – inside every subdirectory of a directory, use the following command

If you want to search case insensitive, use “-i” switch

grep is a very powerful tool. It can somewhat behave like where clause in sql queries.

To find the number of characters, words, and lines, use the wc command.

If you are only looking for the number of lines you could use:

Attend the quiz on wc command

Permissions in unix are integral part of the operating system.

You can see the details of a file using ls -la command:

And you can see the details of all files in the current directory by using:

Every file has an owner (also referred as a user), a group and permissions. A user can be part of many groups. A group can have many users.

The permission attributes of a file signify who can do what.

You can change the permissions of a file using chmod command: chmod permission_cmd myfile

So, if you want to allow the user (the person who owns it) to execute the file:

And to disallow the user (the person who owns it) to execute the file:

Say you want to give the rw permissions to owner and group of a file, you will have to use the following command:

To give members of a group ability to modify a file, use:

Assignment – Owner can change, others can only read

Hint: You can use the following command to remove the write permissions from group and others:

Assignment – Everyone can execute

Assignment – Nobody other than owner can read the file

Using chmod, give it permissions such that nobody other than the owner of a file can read the file.

Assignment – Only Group Members can read

Using chmod, give it permissions such that owner of a file should be able to read and modify, members of groups can only read, others can’t read or modify.

You can also use numbers to represent the permissions.

So, for a file with permissions rwxr-xr-x, the owner has rwx permission which 4+2+1=7 and group and others have r-x which means 4+0+1 = 5. Thus the command you would use to set such permission would be: chmod 755 myfile.

Attend the quiz on permission – numeric

There is a special user called root on Unix systems which has all the privileges which can give permission to any user on any file.

Some users who are allowed to act on behalf of the root are called sudoers. This list of sudoers can be edited using the sudoedit command. Such users are allowed to run commands as if they are root using: sudo .

Attend the quiz on permissions – advanced

Every program or command is a sequence of instructions stored as a file. You run it on the shell or by any other means such as double-clicking it from the user interface.

When it is run, the content of the program is read from a file and loaded into the memory and then instructions are executed by the operating system.

All the commands that we have been using ls, cat were programs.

Attend the quiz on process

While a program is running, it is called a process. A process is uniquely identified by PID – process id. To find out the information about all the processes, you can use the following commands: pstree, top, ps.

The first column mentions the user id who has started the process.

To continuously monitor all processes, use “top” command. This command is usually used to monitor which processes are running, taking up most CPU or Memory.

To learn more about command use man command name. So, please go through manual using command

So far whenever we ran a command, if it is taking time, we had to wait till it finishes before we could type another command. If a process is taking time and does not require input from you, you would like to run it in the background.

To run a program in the background, put a ‘&’ at the end of the command:

Send a process in background

There is a command called sleep which can make you wait for specified seconds. Please send sleep command in background using:

To kill any running process, please use the command:

Basically, “kill” lets you send a signal to the running process. For example, to send terminate signal, you can use

When you exit the shell or disconnect, the processes you were running get killed. To keep a process running in the background even if the shell has been disconnected, use

A process (parent) can execute another process (child). When a parent process is killed all the child processes are automatically killed. The main system process that is started first is numbered as 1. If this process is killed the system will shut down.

To see the tree of processes, you can use the command

Attend the quiz on process hierarchy

In the second part of the Linux series, we will learn how to write a shell script followed by other important concepts and commands.