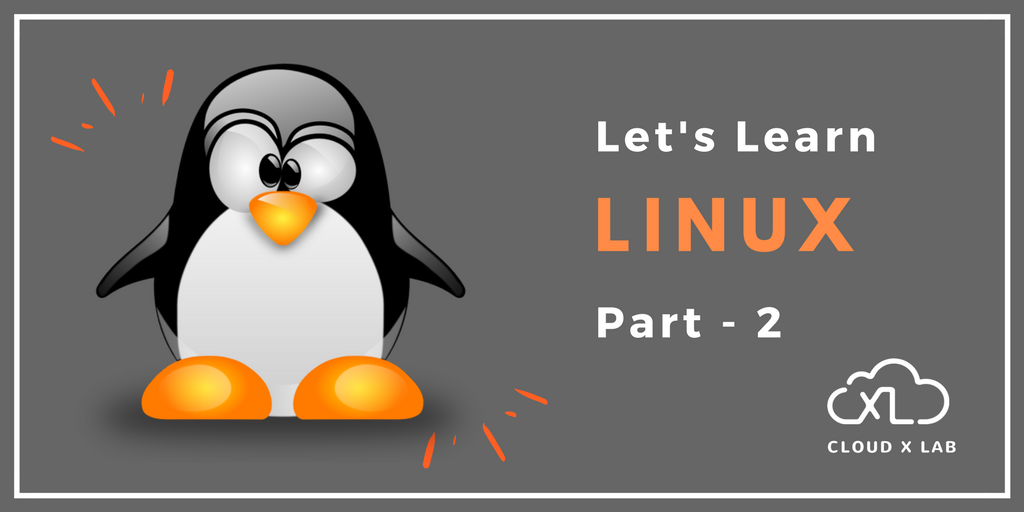 In the Part-1 we learned the following topics on Linux.

Keeping up the same pace, we will learn the following topics in the 2nd part of the Linux series.

A shell script is a file containing a list of commands. Let’s create a simple command that prints two words:

1. Open a text editor to create a file myfirstscript.sh:

2. Write the following into the editor:

Note: In Unix, the extension doesn’t dictate the program to be used while executing a script. It is the first line of the script that would dictate which program to use. In the example above, the program is “/bin/bash” which is a Unix shell.

2. Now, by default, it would not have executable permission. You can make it executable like this:

Every program returns a value to the operating system. It is also referred as the exit status. In Linux, a program returns 0 if successful. Otherwise a non-zero error number.

To check the return value of the previous command you can check the value of a special variable “?”

Attend the quiz on echo command

There are some programs that need to keep running all the time. Such programs are called services.

You can communicate with such programs even from another computer. These programs or processes bind themselves to a port. No two programs can listen on the same port.

You can connect and talk to any service using nc command in the following way:

The way a person refers to himself as “I”, a computer refers itself as localhost or IP Address 127.0.0.1.

If you want to give multiple names to a single file without copying the content, you can create the link.

2. Put the following text in it:

4. Check if the file has right data:

The link that we created previously were known as hard link. If you delete the original file, the hard link would not be impacted.

A symbolic link points to a file. In case, the original file is deleted, the symbolic link would be pointing to the non-existing file.

You can create a symbolic link to a directory too.

2. Put the following text in it:

4. Check if the file has right data:

7. Check the contents of myslink using:

Say, you want to execute a command only if another command is successful then you use &&.

And if you want a command to be executed if another command has failed, you use ||.

2. The following command would print “Tea is ready” if the tea_ready file exists:

5. The following will print “Tea is not ready”:

6. You can use brackets to avoid confusion:

Redirecting the output of a program

The output of a program can be saved to a file:

If “myfile” does not exist, it will be created. If it exists it will be overwritten.

1. Run the following command to save the output of echo to a file:

If we want to send the output of one program to another, we can use pipe. A pipe is denoted by “|”.

“echo” command prints on the standard output whatever argument is passed to it.

“wc” command prints the number of characters, words, and lines out of whatever you type on standard input. Start “wc” command, type some text and press Ctrl+d to end the input:

Now, if we want to count the number of words, characters in the output of any program, we can pipe the output in the following way:

You can also save the results using redirection, in the following way:

Pipes are very powerful. They can be chained to solve many problems. So, most of the commands are built in a way that they can be used with pipes as long as they read from standard input (keyboard or pipe) and write to standard output (screen or pipe )

Such programs that can be used with pipes are generally called filters. Command examples of filters are:

wc – for counting the letters, words, and lines in the input

grep – displays only the lines from the input in which keyword (which is passed as argument) is found.

more – displays the input in a page-wise manner

cat – displays the content of the file passed as an argument

sed – substitute a word with another word: sed ‘s/word/another_word/’

tr – translate character ranges. For example to lowercase characters in input you can use:

uniq – Display the uniq input lines. The input lines need to be sorted. If you want to display frequency, use:

Check the Data using cat command. Since the file is big, you can use “more” to see pagewise

Replace space with newline such that every line in output contains the only single word:

For example, after replacing space with a new line in “I am ok” we should get:

The “/g” is an option of sed which makes replace all occurrences of space instead of only one.

Also, note this command has three programs connected by two pipes. The output of cat is going to sed and output of sed is going to more to see the pagewise.

Note that we are using “more” command just to avoid screen-blindness (too much text scrolling).

We can now, count the words using uniq command

We can further improve the word frequency count by using more filters.

Please note that since we are using regular expressions, we need to specify “-E”

Display most frequent at the top or display the results in reverse numeric sorting:

If the input file is big, the sort command might use too much of memory. So, you can force sort command to use less memory say 100 MB:

After all of these improvements, please save the results

A shell script is a file which contains the commands separated by a newline.

Let’s create a script to do the sorting of the data:

3. Add the command in the editor:

Please recall “./” means current directory and ” | more” will show the result pagewise instead of causing too much scrolling.

Also, note that whatever is the input to the script is also passed to the programs executed in the script.

In Unix, there is a file /etc/shadow that contains (one-way) encrypted passwords for every user. The user can not see the contents of the file. This is to defend the password cracking programs.

To change the password, a user needs to use the command: passwd. This passwd command first asks you for your old password and encrypts your input and compares it against the value in the file /etc/shadow. If it matches then it updates the password file /etc/shadow with new content.

When you are not allowed to view the /etc/shadow file, how can a program (passwd) do the same when run by you?

Usually, a program runs with the same permissions as the user who is running it. The program can read or modify only the files which user is allowed to.

You can make a program setuid by giving ‘s’ instead of ‘x’ permission. If you have written a script x.sh, an example would be:

1. Start creating a file with the name whoownsit_username.sh in /tmp directory:

Note: If your username is sandeep1234, the filename would be whoownsit_sandeep1234.sh

2. Put the following content in the editor in the previous step:

4. Give it setuid permission:

5. Check if you have given correct permission by

It should display something like this in permissions: rwsrwsr_x

Attend the quiz on permissions

This command makes a program run as root (the system administrator). This command is only allowed to be used by few users. Such users are called sudoers. You can modify the sudoers using

This command makes the system shutdown. You can use the following command to shutdown the system immediately

The alternative command to shutdown immediately is: “halt”

To restart the system, you can use “reboot” command.

Please note that above commands (shutdown, halt, reboot) can only be run as root.

Where is my program?

To find where is your program located, you can use “which” command.

would print “/usr/bin/java” which means java is a command in the directory “/usr/bin”.

To further find out, you can use:

Further, to find out about the content of a file, you can use “file” command:

This means it is Linux binary.

These environment variables can be used by the shell, programs or commands.

For example, the $PS1 variable is used by the shell to display the prompt. To change your prompt, you can try:

The environment variable $PATH is a list of directories separated by a colon. It is used by the shell to find the file corresponding to a command.

You can set the environment variables simply by assignment: MYVAR=VAL

are equivalent to the single command: