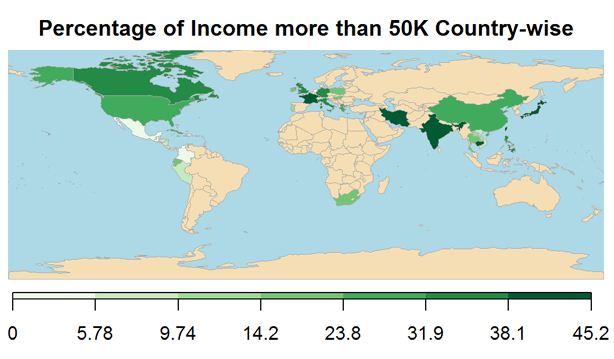 The dataset used for the analysis is an extraction from the 1994 census data by Barry Becker and donated to the public site http://archive.ics.uci.edu/ml/datasets/Census+Income. This dataset is popularly called the “Adult” data set. The way that we will go about this case study is in the following order:

As mentioned earlier, the data set is from http://archive.ics.uci.edu/ml/datasets/Census+Income.

Training data and test data are both separately available at the UCI source. Both the data files are downloaded as below. The test file is set aside until model validation.

Dataset is read and stored as train data frame of 32561 rows and 15 columns. A high level summary of the data is below. All the variables have been read in their expected classes.

The training data set is cleaned for missing or invalid data.

About 8% (2399/30162) of the dataset has NAs in them. It is observed that in most of the missing data set, the ‘workclass’ variable and ‘occupation’ variable are missing data together. And the remaining have ‘nativecountry’ variable missing. We could handle the missing values by imputing the data. However, since ‘workclass’, ‘occupation’ and ‘nativecountry’ could potentially be very good predictors of income, imputing may simply skew the model.

Also, since most of the missing data 2066/2399 (~86%) rows pertain to the “<=50K” incomelevel and the dataset is predominantly of “<=50K” incomelevel, there will not be much information loss for the predictive model building if we removed the NAS data set.

Data sets with NAs are removed below:

The ‘fnlwgt’ final weight estimate refers to population totals derived from CPS by creating “weighted tallies” of any specified socio-economic characteristics of the population. This variable is removed from the training data set due to it’s diminished impact on income level.

Each of the variables is explored for quirks, distribution, variance, and predictability.

Since the model of choice here is Boosting, which is non-parametric (does not follow any statistical distribution), we will not be transforming variables to address skewness. We will, however, try to understand the data to determine each variable’s predictability.

The Age variable has a wide range and variability. The distribution and mean are quite different for income level <=50K and >50K, implying that ‘age’ will be a good predictor of ‘incomelevel’. 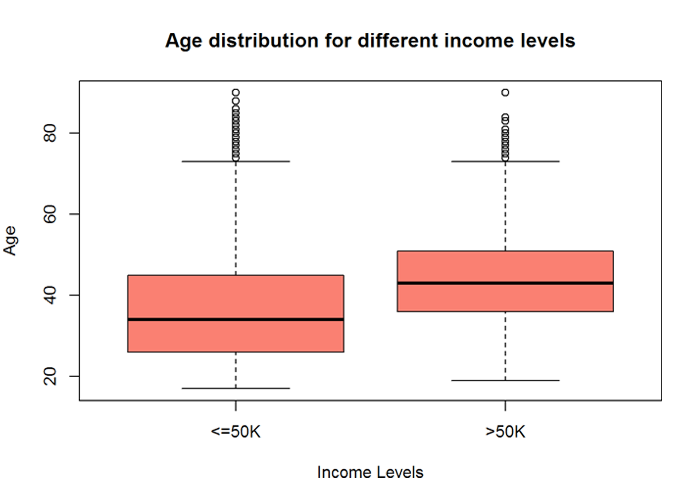 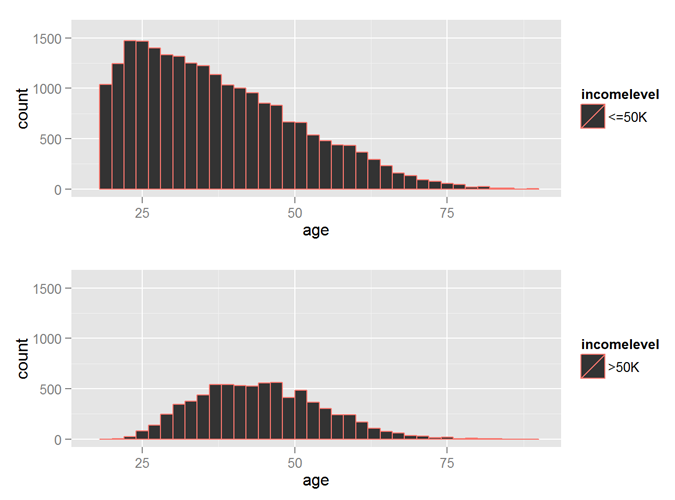 5.1.2 Explore the Years of Education Variable

The Years of Education variable has good variability. The statistics are quite different for income level <=50K and >50K, implying that ‘educationnum’ will be a good predictor of ‘incomelevel’. 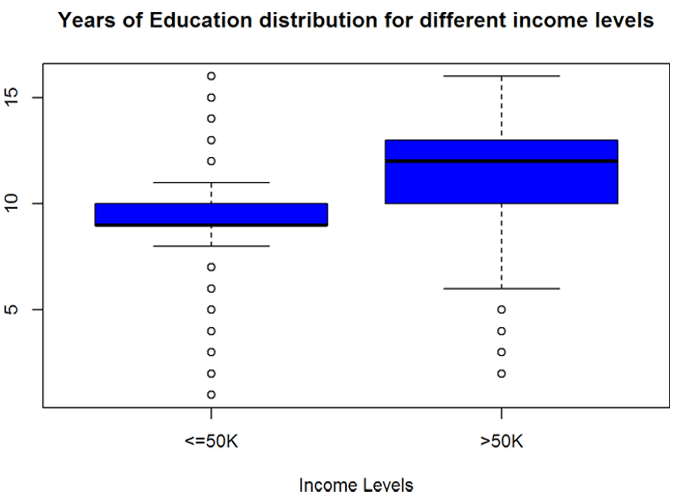 The capital gain and capital loss variables do not show much variance for all income levels from the plots below. However, the means show a difference for the different levels of income. So these variables can be used for prediction.

5.1.4 Explore the Hours Per Week variable

The Hours Per Week variable has a good variability implying that ‘hoursperweek’ will be a good predictor of ‘incomelevel’. 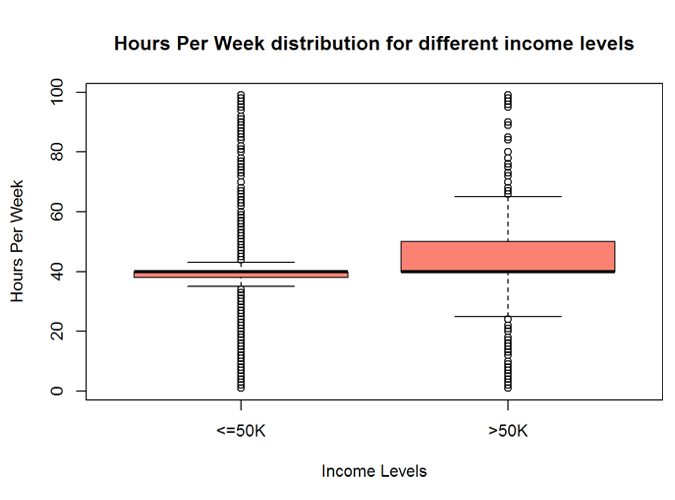 5.1.5 Explore the correlation between continuous variables

The below shows that there is no correlation between the continuous variables and that they are independent of each other.

Mostly the sex variable is not a good predictor, and so is the case for the income level prediction too. This variable will not be used for the model. 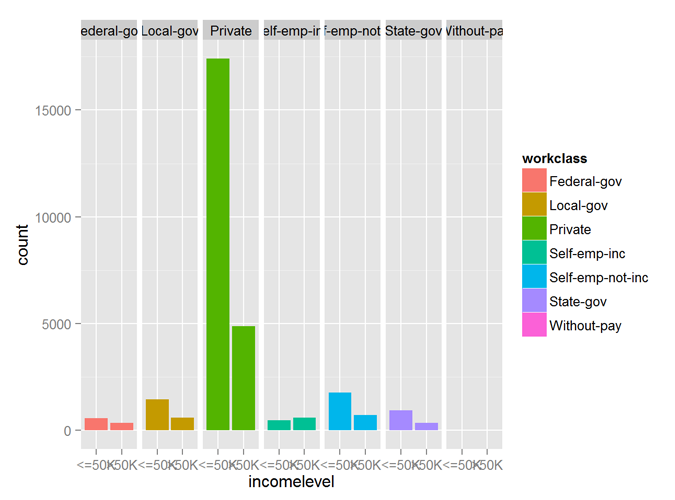 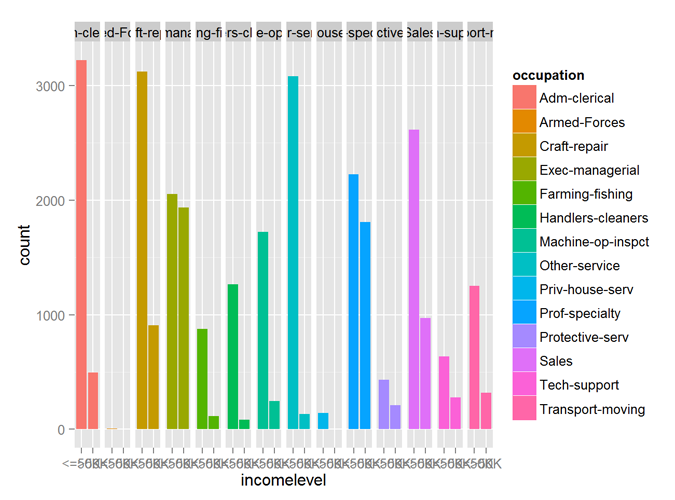 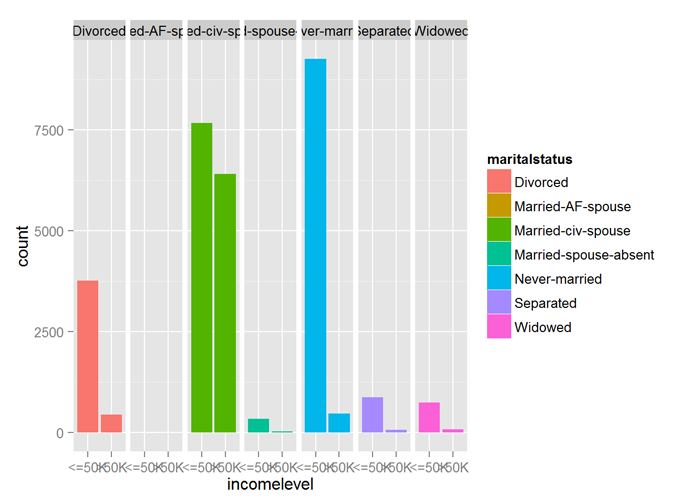 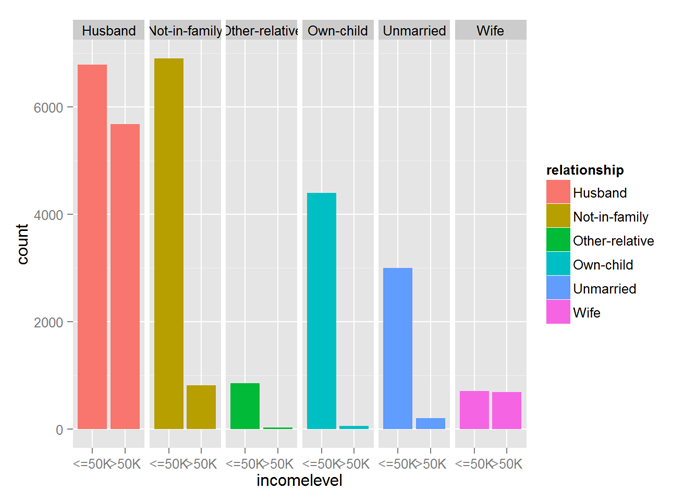 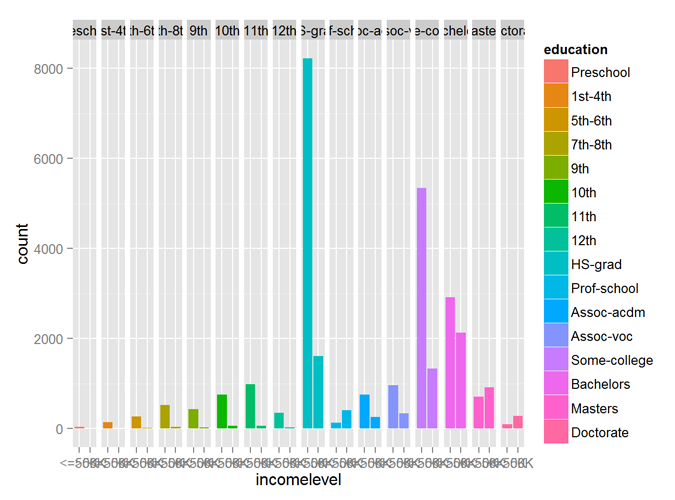 Plotting the percentage of Income more than USD 50000 nativecountry-wise, shows that nativecounty is a good predictor of incomelevel.

The names of the countries are cleaned for display on the world map. The code pertaining to these are now shown to keep the article concise.

Finally, down to building the prediction model, we will be using all the independent variables except the Sex variable to build a model that predicts the income level of an individual to be greater than USD 50000 or less than USD 50000 using Census data.

Since Census data is typical of weak predictors, the Boosting algorithm is used for this classification modeling.

I have also used Cross Validation (CV) where the training data is partitioned a specific number of times and separate boosted models are built on each. The resulting models are ensembled to arrive at final model. This helps avoid overfitting the model to the training data.

The confusion matrix below shows an in-sample overall accuracy of ~86%, the sensitivity of ~88% and specificity of ~79%.

The created prediction model is applied to the test data to validate the true performance. The test data is cleaned similar to the training data before applying the model.

The cleaning is not shown to keep the case study concise. The cleaned test dataset has 15060 rows and 14 columns with no missing data.

The prediction model is applied on the test data. From the confusion matrix below the performance measures are out-of-sample overall accuracy of ~86%, sensitivity of ~88% and specificity of ~78%, which is quite similar to the in-sample performances

During a data analytics exercise, it is very important to understand how the built model has performed with respect to a baseline model. This helps the analyst understand if there is really any value that the new model adds.

So the prediction model does perform better than the baseline model.

The below maps shows the overall prediction Overall Accuracy, Sensitivity and Specificity nativecountry-wise (For keeping the report concise, the computations for plotting the map are not shown). 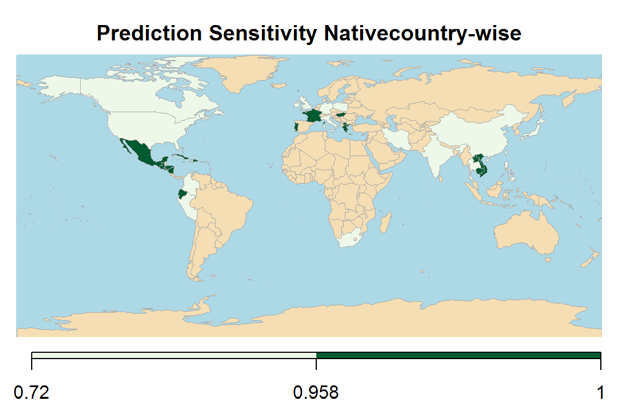 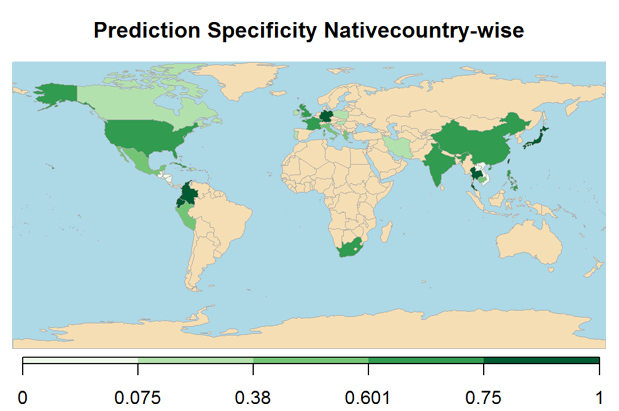 Hope this guide was helpful. Please feel free to leave your comments. Follow CloudxLab on Twitter to get updates on new blogs and videos.