What is a Rate Limiter?

In this blog, we’ll see how will tackle the question of designing a rate limiter in a system design interview. 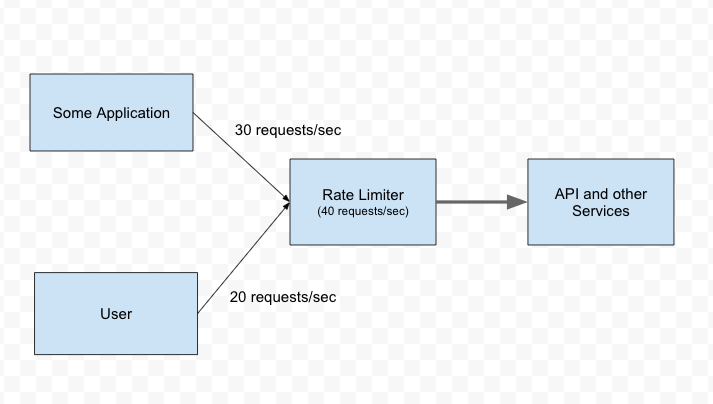 Why Rate Limiter is required?

Rate limiting is a very important part of any large-scale system and APIs and it can be used to accomplish the following:

It can happen when a large number of requests come in a very short period of time or due to Denial of Service (DoS) attacks.

In complex systems, it can be used to control the flow between linked services to stop one service from accumulating all the resources

If the resources can auto scale, rate limiting is used to control the excess cost if something goes out of control

Leaky Bucket is a simple and intuitive way to implement rate limiting using a queue. It is a simple first-in, first-out queue (FIFO). Incoming requests are appended to the queue and if there is no room for new requests they are discarded (leaked).

It maintains a constant near uniform flow to the server as it processes the requests at a constant rate. It is easy to implement on a load balancer and is memory efficient for each user.

In the Token Bucket algorithm, we process a token from the bucket for every request. New tokens are added to the bucket with rate r. The bucket can hold a maximum of b tokens. If a request comes and the bucket is full it is discarded.

We keep a counter for a given duration of time and increment it for every incoming request. Once the limit is reached, the next requests are discarded until the counter is reset after the time has passed.

The sliding Log algorithm maintains a time-stamped log for each request on the user level. The system stores these logs in a time-sorted hash set or table. Logs with timestamps beyond a threshold are discarded. We look for older requests and discard them. Then we calculate the sum of logs to determine the request rate. If the request is below the threshold rate, it is processed else it is held.

It is more memory efficient than sliding log algorithm. It combines the fixed window algorithm’s low processing cost and the sliding log’s improved boundary conditions. We keep a sliding window of our time duration and only service requests in our window for the given rate. If the sum of counters is more than the given rate of the limiter, then we take only the first sum of entries equal to the rate limit.

How will you design a rate limiter for your API?

Suppose you are asked a question to design a rate limiter. You should first know the requirements by asking various questions to the interviewer.

Candidate: What kind of rate limiter are we going to design? Will it be client side or server side?

Interviewer: We will be designing server-side rate limiter for our API.

Candidate: Will we throttle the API based on requests per second, IP or anything else?

Interviewer: We will throttle the API based on requests per second.

Candidate: Suppose this is an asynchronous job. So, we have a couple of options:

Option 1: Throttle on the API level

You can describe pros and cons of these algorithms as above.