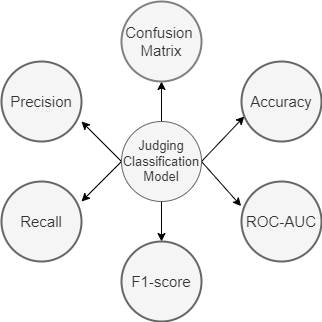 In this blog, we will discuss about commonly used classification metrics. We will be covering Accuracy Score, Confusion Matrix, Precision, Recall, F-Score, ROC-AUC and will then learn how to extend them to the multi-class classification. We will also discuss in which scenarios, which metric will be most suitable to use.

First let’s understand some important terms used throughout the blog-

True Positive (TP): When you predict an observation belongs to a class and it actually does belong to that class.

False Positive (FP): When you predict an observation belongs to a class and it actually does not belong to that class.

False Negative(FN): When you predict an observation does not belong to a class and it actually does belong to that class.

Classification Accuracy is what we usually mean, when we use the term accuracy. It is the ratio of number of correct predictions to the total number of input samples.

For binary classification, we can calculate accuracy in terms of positives and negatives using the below formula:

So, you should use accuracy score only for class balanced data.

You can use it by-

In sklearn, there is also balanced_accuracy_score which works for imbalanced class data. The balanced_accuracy_score function computes the balanced accuracy, which avoids inflated performance estimates on imbalanced datasets. It is the macro-average of recall scores per class or, equivalently, raw accuracy where each sample is weighted according to the inverse prevalence of its true class. Thus for balanced datasets, the score is equal to accuracy.

A confusion matrix is a table that is often used to describe the performance of a classification model on a set of test data for which the true values are known.

It is extremely useful for measuring Recall, Precision, Specificity, Accuracy and most importantly AUC-ROC Curve.

It tells you that out of all the positive classes, how many we predicted correctly.

Recall should be as high as possible. Note that it is also called as sensitivity.

It is difficult to compare two models with low precision and high recall or vice versa. If you try to increase precision, then it may decrease recall and vice versa. So it ends up in a lot of confusion.

So to make them comparable, we use F1-Score . F1-score helps to measure Recall and Precision at the same time.

It uses Harmonic Mean in place of Arithmetic Mean by punishing the extreme values more.

Specificity(True Negative Rate): It tells you what fraction of all negative samples are correctly predicted as negative by the classifier.. To calculate specificity, use the following formula.

False Positive Rate : FPR tells us what proportion of the negative class got incorrectly classified by the classifier.

See, If you know clearly what task you have to accomplish, then it’s better to use precision and recall over f1-score. For example, suppose government launched a scheme for free cancer detection. Now, it’s costly to perform a single test. So, government assigned you a task to build a machine learning model to identify if a person is having cancer. It will be an initial screening test as government will take predictions from your model and will test those persons which your model predicted to have cancer, with real machines that whether they really are having cancer or not. That will reduce the cost of the scheme to much a extent.

Not only numerical metrics, we also have plot metrics like ROC(Receiver Characteristic Operator) and AUC(Area Under the Curve) curve.

AUC — ROC curve is a performance measurement for the classification problems at various threshold settings. This graph is plotted between true positive and false positive rates. The area under the curve (AUC) is the summary of this curve that tells about how good a model is when we talk about its ability to generalize.

If any model captures more AUC than other models then it is considered to be a good model among all others. So, we can conclude that more the AUC the better the model will be on classifying actual positive and actual negative.

In this scenario, we must define a classification threshold. By default, the logistic regression model assumes the classification threshold to be 0.5, that is all patients getting a prediction score of 0.5 or above are having cancer otherwise not. But note that thresholds are completely problem-dependent. In order to achieve the desired output, we can tune the threshold. But now the question is how do we tune the threshold?

For different threshold values we will get different TPR and FPR. So, in order to visualize which threshold is best suited for the classifier we plot the ROC curve. A typical ROC curve looks like-

Sometimes, we replace the y-axis by precision and x-axis by recall. Then the plot is called as precision recall curve which does the same thing(calculates the value of precision and recall at different thresholds). But it is restricted only to binary classification in sklearn.

Extending the above to multiclass classification-

The true positive, true negative, false positive and false negative for each class would be calculated by adding the cell values as follows:

Precision and recall scores and F-1 scores can also be defined in the multi-class setting. Here, the metrics can be “averaged” across all the classes in many possible ways. Some of them are:

ROC curves are typically used in binary classification to study the output of a classifier. To extend them, you have to convert your problem into binary by using OneVsAll approach, so you’ll have n_class number of ROC curves.

In sklearn there is also classification_report which gives summary of precision, recall and f1-score for each class. It also gives a parameter support which just tells the occurence of that class in the dataset.