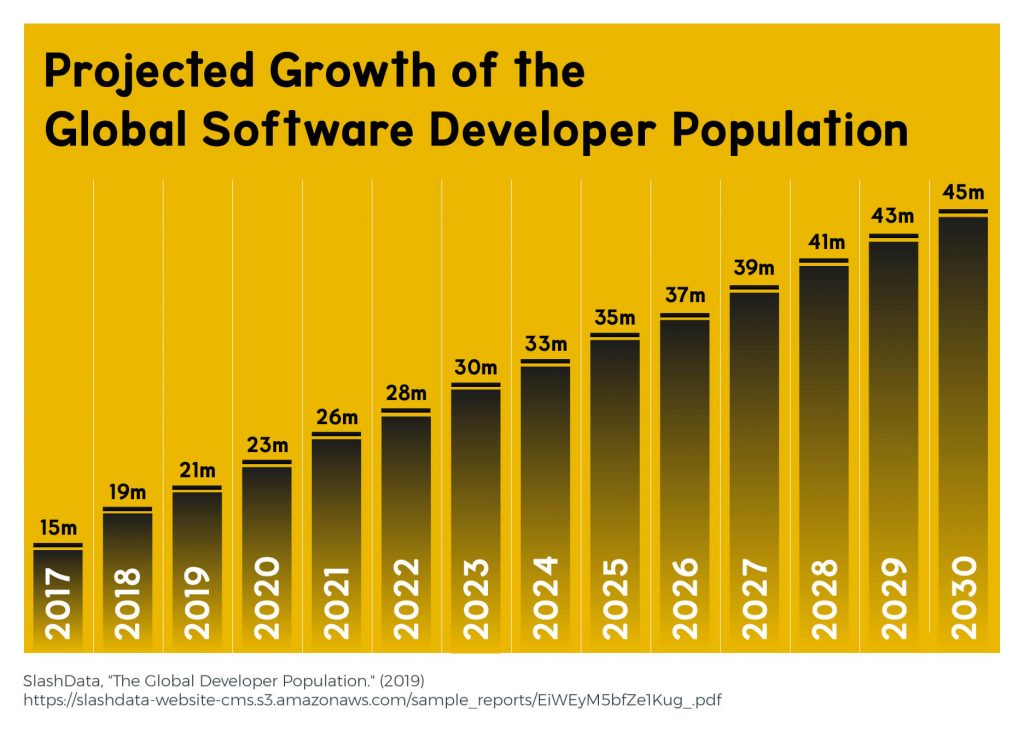 Today’s world is also known as the world of software with its builders known as Software Engineers. It’s on them that today we are interacting with each other because the webpage on which you are reading this blog, the web browser displaying this webpage, and the operating system to run the web browser are all made by a software engineer.

In today’s blog, we will start by introducing software engineering and will discuss its history, scope, and types. Then we will compare different types of software engineers on the basis of their demand in the industry. After that, we will discuss on full-stack developer job role and responsibilities and will also discuss key skills and the hiring process for a full-stack developer in detail.

Software is a set of instructions, data, or programs used to operate a computer and execute specific tasks. In simpler terms, the software commands the hardware how to function. And, the study of the art of design, development, and maintenance of software is known as Software Engineering.

The term ‘Software Engineering’ dates back to the late 1950s and early 1960s.  Margaret H. Hamilton was the person who came up with the idea of naming the discipline- Software Engineering. Its initial phase of rising was accompanied by the so-called software crisis of the 1960s, 1970s, and 1980s, which identified many of the problems of software development, such as cost and budget overruns, property damage, and even causing loss of life in some projects.

The rise of the Internet in the 1990s led to very rapid growth in the demand for Software Engineers. The growth of browser usage, running on the HyperText Markup Language (HTML), changed the way in which information display and retrieval were organized.

The beginning of the 21st century is no less than a miracle in the field of software engineering. The craze for software engineers is increasing exponentially in the industry and shows no sign of stopping. Even during the job crisis of the COVID-19 era, “Software Engineering” was considered one of the least risky professions in the world. This was possible because of the easier digitalization of the software industry.

Software engineers are the most sought-after professionals on the market in 2022 with a global community of more than 26.9 million engineers. There were 1.3 million software engineer job vacancies available in 2021 in India alone, with 5.8 million developers employed at that time. This is due to the rapid growth of technology.

As the world is moving online, everyone, whether it is an individual or a business, wants to mark their presence digitally. This is mostly because of benefits such as flexibility, a large customer base, analytics report, and less-investment-more-profit provided by the digital market. Around 70-80% of people research a company online before visiting it or making a purchase. Therefore, it is no longer an option but has become necessary for businesses to be present digitally.

According to the Progressive Policy Institute (PPI), India will be the country with the largest software developer population in 2024 followed by the US.

According to the U.S. Bureau of Labor Statistics (BLS), the number of job opportunities in software development is projected to increase by 22% from 2020 to 2030, much higher than the projected national average growth rate for all professions of 8%.

By 2030, it is estimated that 45 million people worldwide will be working as software engineers. – That’s the total population of a country like Argentina.

So, if you are planning to make a career in software engineering, this is the right time to start. The best part about this profession is that you don’t need to be completely proficient before entering the industry, which is expected in other professions. The only expectation from you is to have a hunger for learning new things and a desire for problem-solving despite any odds.

There are many different types of software engineers, such as-

Web developers are more in demand than other developers due to the high demand for websites in comparison to desktop or mobile applications. Currently, there are around 2 billion websites in the world with a rate of three new websites being created every second. On the other hand, there are fewer than 10 million mobile apps and an even smaller number of desktop apps in the world currently. This huge gap itself tells us the reason for web developers being in greater demand than other developers.

As we have discussed above, a full-stack developer is a person who can handle both the front-end and back-end of a website. The term “full-stack” refers to the technologies and skills needed to complete a project, with each individual component being a ‘stack’. They are responsible for the entire process of developing a website from start to finish independently. They are skilled at dealing with all kinds of work such as databases, servers, system engineering, architecting, and client communication that are required to make complete products.

The hiring of a Full-Stack Developer

Everyone faces challenges in life. It’s a matter of how you learn to overcome them and use them to your advantage.

So, the hiring process usually consists of four rounds, which are-

The coding round is the first round for which you may appear during the hiring process. There can be a variable number of coding rounds depending on the size and scale of the company. For example, tech giants like Facebook and Google usually conduct 4-5 coding rounds. The level of difficulty keeps on increasing with each round. This is done to filter the best out of the best candidates. On the other hand, startups or small-scale companies only conduct 1-2 coding rounds. The main objective behind this round is to test your ability to write code to solve problems and optimize your code further.

This round can be conducted in two ways:-

How to prepare – references?

The students who qualify in the coding round are given the opportunity to appear in the system design interview round. Now, this is where your full stack skills are tested.

At last, comes the behavioral round. It is a non-technical round conducted by an Engineering Manager or HR. The main objective here is to understand if you really are culturally fit.

You are assessed in various areas such as:

On clearing this round, you get an offer letter from the company and that’s the first time you realize that all that hard work paid off.

As I have said before, it’s quite difficult to become a full-stack developer on your own as you have to gather random pieces of scattered information from the internet and combine them on your own to learn all these skills. For a newbie, it becomes even more difficult as it’s a vast field with an endless stream of knowledge. So, it becomes hard to figure out how much to grasp. This results in:

Also, that may not seem like a problem at the start of the journey, but later on, this is the thing that forces people to leave the journey mid-way. After all, it’s a long journey! But as you know- No journey is too long with the right company. And with the right guidance, the path becomes a lot easier. So the thing you need is- Guidance.

Therefore, it’s advised to take a course or join a program that may provide you proper guidance. You can check our Full Stack Development regarding it.

So that’s all for today. In this article, we have done a detailed analysis of Software Engineering. By now, I am sure that you have sufficient information to decide whether to choose this industry or not. Happy Learning!!